To many people the decision on when to start taking Social Security can be a difficult decision. As we all know those that can claim Social Security may start getting benefits as early as age 62, or as late as age 70. So how do you decide when you should take yours? This actually turns out to be a Year by Year decision.

The first decision is, “Do I absolutely need the money to live on, with few other options”, if so then go ahead and start receiving benefits at age 62. However, you should also consider the idea that the longer you wait, the more you get and the difference is substantial.

Let’s look at some examples.

Then, at age 63, you would want to see if it makes sense to wait until 64. The breakeven point between claiming at 63 and claiming at 64 is age 76. Using the same actuarial tables, we can calculate that for an average 63 year old male, there is a 74% probability of living to age 76. For a 62 year old female, there is an 82% probability. It probably makes sense to wait another year.

And then you would repeat this analysis every year. For somebody with a full retirement age of 66, the year-by-year breakeven ages would be as follows: 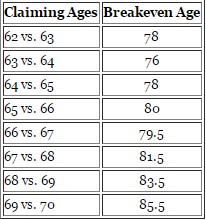 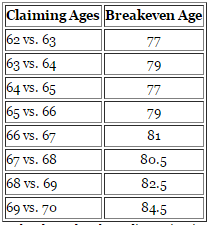 The above analysis is just a simplification, to show the general idea that the decision should be made year-by-year rather than simply asking “Should I claim at 70 or at 62?”

A real-life analysis of your situation could include a few other factors, such as:

What should you do? If you think you are going to live into your 80”s, which has a high probability, they longer you wait, the more money you’ll have to live on.

Here is another interesting article on the real value of Social Security as if it were a bond!