For those of us near or in retirement consistent, reliable cash flow is one of the very important components of our overall financial plan.

I am just delighted to see that some of my stocks are consistent payers and INCREASER’S of their dividends. Here are just 2 examples.

Realty Income Corporation (ticker symbol O)
I have held this REIT for many years. It pays a monthly dividend and the dividend increase announced this month is the 99th increase since the company went public 1994. Talking about consistency and reliability, they have made 582 consecutive monthly dividend payments, never missed a payment in over 48 years!

Dominion Energy (ticker symbol D)
This is a major public utility that is also active in renewable energy and LNG exporting. They just raised their dividend by 10%, this was already a 4% dividend before the increase. The “talking heads” say that utilities would get crushed by all of the “high interest rates”, but we know that as a long term income investor our utility picks will continue to pay us a healthy dividend.  So, how do we know this, well Dominion has increased it’s annual dividend for 16 consecutive years. Yes, that was even during the 2007-2009 financial crisis.

When we follow our financial plan we just don’t need to worry about the short-term ups and downs in the stock market …. we are sleeping pretty well at night!

Many people flock to the ALT economy to get away from “big brother”, including the Tax Man. Where as some income in the “gig” economy may not be easily tracked for tax purposes, I can assure you that  Bitcoin and Uber are highly visible to the IRS.

Let’s deal with the easy one first, Uber (similar with Lyft), you need to pay taxes on a income generated being an Uber driver. You however can deduct your business expenses against that income.

The IRS requires that Uber provide a 1099-K for all drivers that meet BOTH of these criteria:
For settlement of third-party payment network transactions above the minimum reporting thresholds of, gross payments that exceed $20,000, AND more than 200 such transactions (rides) per year.

On the 1099-K, box 1a is the only number you need, it is your gross income and will need to be reported as business income on Schedule C. Please also note that any cash tips and “free lance” driving for a fee must also be reported as income.

The good news is that being an Uber driver is a business and as such you can deduct business expenses from you business income to determine a profit or loss. Uber provides their drives with a Tax Summary report each year that shows all the fees paid to Uber and the “on-trip” mileage. This however is just the mileage while you had a rider in your car. A smart Uber driver will track daily all mileage to pick up the first driver, mileage to get the next rider and mileage to get home after the last ride. The easiest way to handle Uber (business mileage) is to use the IRS standard mileage deduction of $0.545 per mile. If you take the standard mileage deduction you can’t also deduct gasoline, insurance or repairs. But you can add in tolls and parking.

The net Profit or Loss on a business Schedule C goes directly to to your personal income tax form 1040. Keep in mind that Uber income is also subject to “self employment tax” of 15.3%. There is a 50% credit of this amount against your adjusted gross income, but you are still paying for social Security and Medicare.

Tax on Bitcoin transactions is no different than the sale of any asset like stocks or property, you don’t have to report anything unless you SELL. Bitcoin record keeping is YOUR responsibility. It can be challenging , however if you use an exchange like Coinbase and stay within that exchange they will send you a “cost basis for taxes” report.

Here is why it can get challenging. Let’s say, in January back you bought 10 bitcoins at the rate of $3,000 each, or may have received them as a payment for work you did for a client. Say, in May those bitcoins may have be worth $15,000 each, putting your potential profit at $12,000 per coin in May.

It is your responsibility to have the necessary records showing that you received them at the time when they were worth $3,000, and your net income is $12,000 per coin. Failing to maintain such transaction information and documents may lead to your holdings being assessed at an even higher , significantly increasing your taxes.

Here are some general rules for Bitcoins:

Bitcoin tip, if you have substantial losses in Bitcoins now might might be a good time to cut your losses and sell some. These losses can help offset other capital gains. Also remember that the maximum loss reported in one year is limited to $3,000 (net), but you can carry-forward capital losses for many years to come. 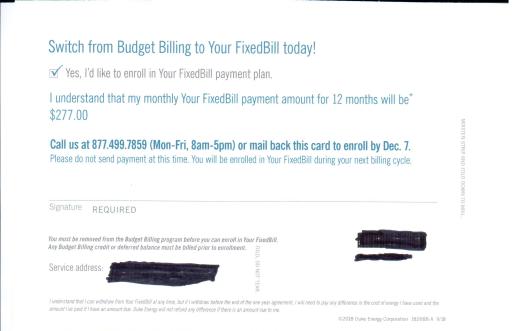 This month I received a flyer from Duke Power offering a FixedBill program, get a fixed billing amount for the next 12 months. Sounds good right?

Here is what I’ve determined:

Overall, I don’t see anything but a benefit to Duke Power who will get an additional $57/mo. from me (as I calculated it).

I don’t think I’ll be signing up for this program!